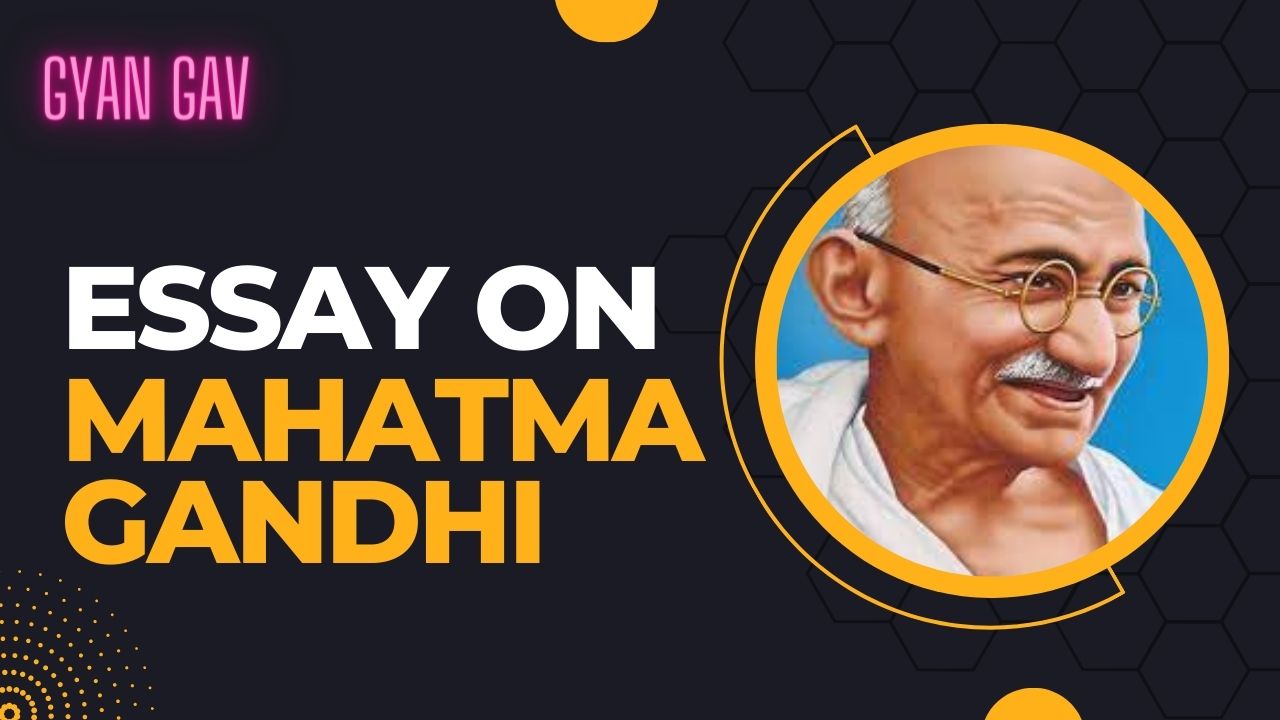 Essay on Mahatma Gandhi – Gandhi was born on October 2, 1869, in Porbandar, a coastal town in present-day Gujarat, India. He was the son of Karamchand Gandhi, the diwan (chief minister) of Porbandar, and Putlibai, Karamchand’s fourth wife, a Hindu of the Pranami Vaishnava order. Gandhi’s father Karamchand was from the Hindu Modh community, which was the highest echelon of the Hindu caste system in Gujarat, and was the chief minister of Porbandar state. His mother, Putlibai, was from a Pranami Vaishnava family. Gandhi’s father Karamchand served as the diwan (Chief Minister) of Porbandar state. As a child, Gandhi was described as studious and sharp, but not particularly athletic. He was deeply influenced by the Hindu scriptures the Bhagavad Gita and the Ramayana, as well as the teachings of Swami Vivekananda, a Hindu monk, and leader of the Vedanta movement. Gandhi’s early life was marked by a lack of direction and a search for meaning. He was married at the age of 13 to Kasturba Makhanji, a girl of the same age, and the couple had four children together.

Gandhi’s political career began in earnest in 1893, when he was asked to serve as a legal representative for an Indian merchant in South Africa. While there, Gandhi was subjected to racial discrimination and violence, which sparked his activism and his commitment to non-violent resistance. He established the Natal Indian Congress in 1894 and began organizing boycotts and strikes against discriminatory laws.

Gandhi returned to India in 1915 and quickly became involved in the Indian independence movement. He led nationwide campaigns for various social causes and for achieving Swaraj or self-rule. Gandhi famously led Indians in protesting the Salt Tax with the 400 km (250 mi) Dandi Salt March in 1930, and later in calling for the British to Quit India in 1942. He was imprisoned for many years, on many occasions, in both South Africa and India.

The influence of his ideas can be seen in the civil rights movement in the United States and the anti-apartheid movement in South Africa. Gandhi was assassinated on January 30, 1948, by a Hindu nationalist, who opposed Gandhi’s philosophy of nonviolence. His birthday, October 2, is commemorated as Gandhi Jayanti, a national holiday in India, and the International Day of Non-Violence.

Gandhi’s vision of an independent India based on religious pluralism, however, was challenged in the early 1940s by a new Muslim nationalism which was demanding a separate Muslim homeland carved out of India.

Mahatma Gandhi is known as the Father of the Nation. His real name is Mohandas Karamchand Gandhi. He was born on October 2nd, 1869 in the state of Gujarat in the town named Porbandar. Who has added the name mahatma due to their work? Gandhi is also Known as Bapu.

Gandhi was the biggest and great patriotic in India. His father’s name was Karamchand Gandhi. His mother was Putlibai. Kasturba Gandhi was his wife married in 1883. After Completing their matriculation, he went to London for further studies.

The Story of My Experiments with Truth is the autobiography of Gandhi, covering his life from childhood through 1921. This was published in his journal Navjivan. ‘Non-violence’ is the main weapon of ‘Gandhi against independence, He inspired civil rights and freedom across the world. so on 15th June 2007, the United Nations General Assembly voted to establish 2nd October as the International Day of Non-Violence. Mahatma Gandhi has done his law in England and returned to India in 1893.

Gandhi always believes that education is the most powerful weapon in this World for the new generation to achieve fundamental rights. After his degree, he started his career as a lawyer. The social life of Mahatma Gandhi began in South Africa, and he faced many problems.

Mahatma Gandhi once said, “The future depends on what you do today.” We can’t predict our future, but we can take a step today. Mahatma Gandhi returned to India in 1915. He became very popular as a Father of the Nation.

Many times he was insulted and tortured by white men because the white men were treated badly by a black man means Indian. He was very popular, and his reputation increases so much. He was also popular as a leading Indian Nationalist.

Then he became a member of the Indian National Congress. He joined Gokhale’s group. Gopal Krishna Gokhale is considered the political guru of Mahatma Gandhi. Many leaders got so much inspiration from the struggle of Mahatma Gandhi As a part of the independence struggle, Gandhi launched many important movements such as kheda satyagraha, Champaran Satyagraha, salt satyagraha, non-co-operation, civil disobedience, and quit India movement.

The lifestyle of Gandhiji was very simple, In 1921 Gandhi started to use the Indian dhoti (loincloth) and a shawl woven with yarn by using hand. The Indian spinning wheel (Charka) shows a sign of India’s rural poor. he ate simple vegetarian food.

Nelson Mandela also influenced from
the freedom struggle of Gandhiji. After Indian independence, Gandhi tried to stop the Hindu-Muslim conflict in Bengal. His birth anniversary is celebrated as Gandhi Jayanti in India. Gandhi Jayanti is celebrated to remember Gandhi’s sacrifice, peace, and non-violence.

Every year Gandhi Jayanti is feasted at Raj Ghat in New Delhi. The Prime Minister and the President of India gather here to pay tribute by offering flowers to Gandhi’s Samadhi. And sang his favorite song.

Gandhi died on January 30″ 1948. Godse shooted Gandhi when he was getting from Birla House Prayer in Delhi. Once upon a meeting, Gandhi was asked to give a message to the people of India.

Gandhi said, “My life is my message”. He trying to spread truth and nonviolence to Indian people. His life was an inspiration for all Indians. Give a big Salute to our Nation’s Father. Words are not enough to explain Gandhi’s sacrifices and values.