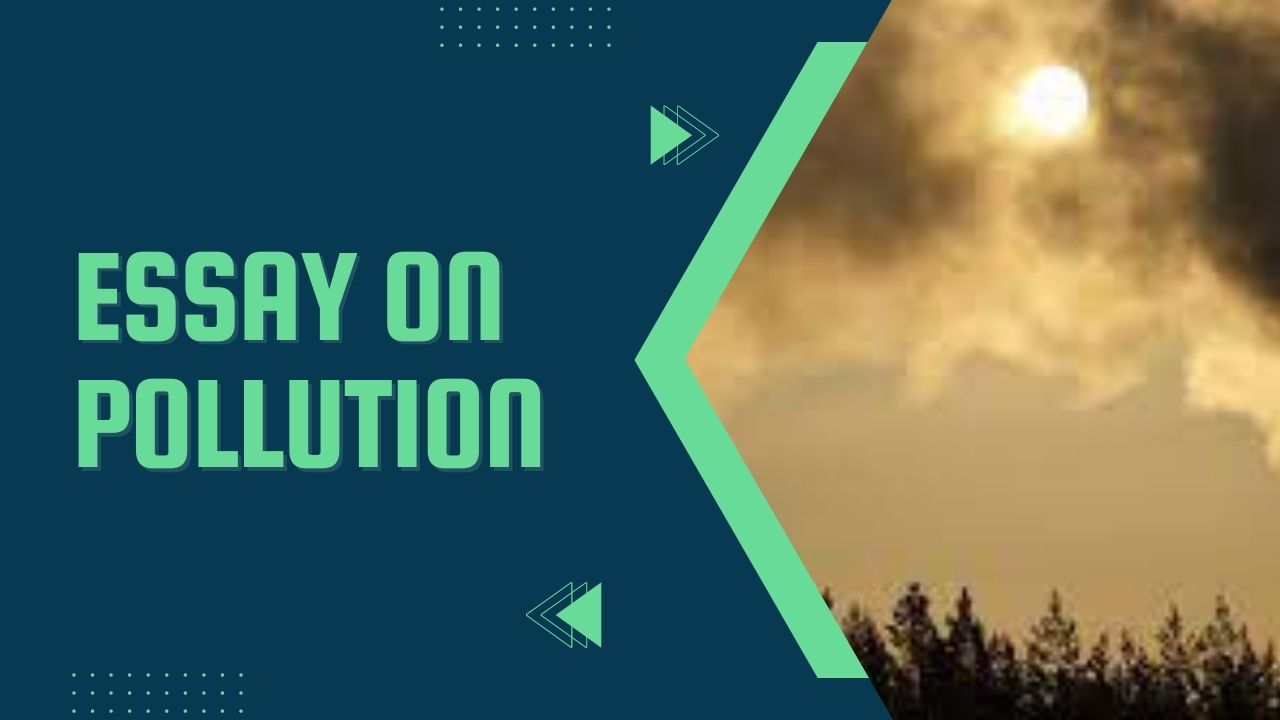 Essay on Pollution Introduction:- The environment is getting polluted day by day due to the ignorance of human beings. We ourselves can feel the impact of the falling quality of air and water. We fear even imagining a time when we will long for fresh air and fresh water. The number of people who are suffering from the ill effects of water and air pollution is increasing.

Stratospheric ozone depletion due to air pollution has long been recognized as a threat to human health as well as to the Earth’s ecosystem.

Air contains 78% of nitrogen and about 21% of oxygen. The rest of the portion consists of carbon dioxide, argon, methane, ozone, and water vapor which are present in very small quantities.

The addition of unwanted and harmful substances in the air or an increase in the quantities of constituents of air beyond the normal level that affects living organisms is called air pollution.

How Does Air Get Polluted

There are two main sources of air pollution:

Natural resources
There are a number of these resources which can cause air pollution. For example:

There is a number of these resources which can also cause air pollution.

We will now find out the substances of pollutants that are present in the polluted air.

Vehicles cause about 50% of the air pollution in India. Vehicles produce high levels of pollutants like carbon monoxide, carbon- dioxide, nitrogen oxides, and smoke; Carbon monoxide (CO) is released from the fumes exhausted by vehicles and released into the atmosphere. It combines easily with hemoglobin. A person inhaling CO suffers from headaches, dizziness, and feels tired. Large quantities of CO can cause death.

Coal fires draw oxygen from the surrounding air and release CO so fires made in poorly ventilated places can lead to death.

The pollutants combined with the water in the air form a dense mass. As the air warms and dries, the particles fell to the ground. Buildings and plants in industrial areas are always coated by a cloud of black dust. The plants covered with this dust cannot photosynthesize property, and this affects plam gro at health Smog affects human health because it irritates the eyes, and lungs of humans Ammi bronchitis and eventually cancer result flange quantifies of smog are inhaled on a regular basis.

Other kinds of pollutants are Chlorothioro carbons (CFCs) which are used in refrigerators, air conditioners, and demo sprays, CFCs damage the ozone layer of the atmosphere. This leads to the entrance of harmful ultraviolet rays onto the earth. Today less harmful chemicals are used in place of CFC1.

Effects on Human Health: Sulphur candida is considered to cause cough, shortness of breath, spasm of the larynx, and acute irritation to the membranes of the eyes. Carbon monoxide often affects the oxygen-carrying capacity of the blood. Poison is dangerous, particularly to children, and may cause brain damage. Chronic poisoning results from the ingestion of forage contaminated with atmospheric pollutants.

When the absorption of sulfur dioxide exceeds a particular level, the cells become inactive and are killed, resulting in tissue and drying of leaves Fluorides are for various types of injuries to plants.

Tetra ethyl lead found in lead petrol is a harmful pollutant. It is the causative agent of cancer and TB

Incomplete petrol and diesel results in the production of carbon monoxide, which decreases the oxygen-carrying capacity of the blood.

The smoke contains oxides of nitrogen that cause diseases like asthma, cough, and respiratory problems in children.

Chlorofluoro Carbon harms the ozone layer of the atmosphere. 8. Gases like sulfur dioxide, chlorine, ammonia, and nitrous oxide create a burning sensation in the eyes and throat disease.

The Taj Mahal is located in Agra. The Taj Mahal is mist (a famous tourist attraction. Over the past 2 decades. Most experts have warned that politics in the air are discoloring its white marble.

The industries in and around Agra, produce pollutants like sulfur dioxide and dioxide. These gases form sulphuric acid and nitric acid when they react with water vapor present in the atmosphere Then they come down with rain, making the rain acidic. This acidic rain is called acid rain. This acid rain has resulted in the corrosion of the marble of the monument.

The Supreme Court has taken steps to save the Taj Mahal from this pollution. It has ordered industries around the Taj to switch to cleaner fuels like CNG (Compressed Natural Gas) or LPG (Liquefied Petroleum Gas).

In a greenhouse, the sun’s rays get trapped. Similarly, when the sun’s rays fall on the earth’s surface, some of them get radiated while some are trapped by the atmosphere which further warms the earth. This is known as the greenhouse effect. Without this, life would not have been possible on the earth, because of the low temperatures.

Carbon dioxide forms a blanket in the upper layers of the atmosphere, trapping heat and not allowing it to escape into space. As more and more carbon dioxide is accumulated in the atmosphere by human activities, the greenhouse effect has increased the earth’s average temperature. This is known as global Global warming has become a major concern worldwide. Efforts are on reducing the emission of greenhouse gases.

Global warming can cause ocean levels to rise. Global warming could result in wide-ranging effects on rainfall patterns, agriculture, forests, and plants, and the majority of people living in such regions are in Asia. A recent climate change report gives us only a limited time to stabilize the greenhouse gases, otherwise, the rise in temperature could be more than 2 degrees Celsius, a dangerous level indeed.

Gases like methane and nitrous oxide, are examples of greenhouse gases.