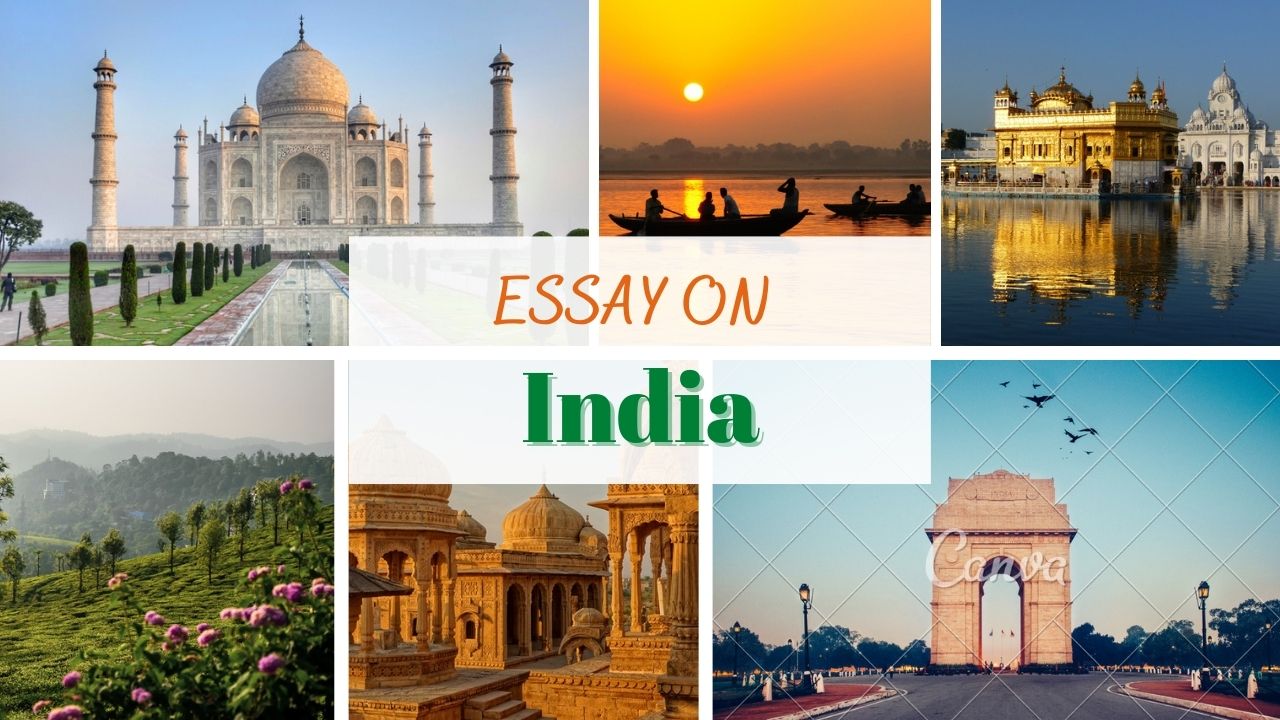 Essay on India – India is a vast country. Based on population, it is the second biggest country in the world. it is one of the fastest-growing economies in the world. India is surrounded by Pakistan, chins, Sri Lanka, Nepal, Bangladesh, Bhutan, Afghanistan, and Myanmar.

India believes in peace, freedom, and mutual cooperation with all nations. India’s relationship with Pakistan has never been smooth. The Jammu and Kashmir issue is the main reason behind it. Many attempts have been made to solve that issue, but nothing has been overcome. India’s relationship with Sri Lanka has been good. some conflicts related to the Tamils created problems, But those have been sorted out to a great extent. India has cultural, historical, and political ties with Nepal apart from some small issues, things have been peaceful. India helped Nepal when it was hit by earthquakes recently. India is Known for its history of kings.

India has always supported peace in Afghanistan. It advocated that the people of Afghanistan should decide about their future themselves. It sent aid for the rehabilitation of Afghan refugees.

India’s relationship with Myanmar and Bhutan has been quite friendly, India has helped Bhutan in industrial and technical fields. India has helped Myanmar during times of unrest. the people of Myanmar were even allowed to stay in Indian camps.

10 lines on My Country India

India of My Dream Essay in English

Everyone in this world has a dream. I too dream of an India that is perfect and beautiful. I want India to be scientifically advanced, technologically better, and agriculturally advanced. The dream India would be self-sufficient in food. I would like the country to be highly industrialized. I would also strengthen India’s defense.

The country would be strong so that no enemy would ever dare. illiteracy would be my next priority because these are banes for any society. People should be educated on a mass scale. My dream India would be the abridgment of the gap between the rich and the poor. if the measures happen India would soon be counted among the most powerful countries in the world.

Essay on Democracy in India in English

Voters are in huge numbers. elections are costly affairs. We require both men and women matevial to fight elections So only rich political parties can set up candidates. the result is that wealthy classes and parties have undue advantages. at times several other factors like casts and religion play an important part in the elections However democracy is the best form of government. but the success of democracy depends upon free elections on some principles.

Voters should not be terrorized. Booths should not be captured. The elements of castes and religion should not be deciding factors in electing candidates. The future of democracy in India is bright through it sometimes forces some problems. our people care little for their duties. they always shout for more rights but for the success of democracy duties are more important than rights.

Q1 What is our National tree?
Answer Indian Banyan tree.

Q2 What is our national Fruit?
Answer Mango.

Q3 What is our National Anthem?
Answer Jana Gana Mana.

Q4 what is our national Song?
Answer Vande Mataram?

Q5 what is our national Reptile?
Answer King cobra

Q6 What is our NAtional Vegetable?
Answer Pumpkin

Q7 What is our national heritage Animal?
Answer Indian Elephant

Q8 what is our national game?
Answer Hockey

Q9 What is our national Bird?
Answer Indian Peacock

Essay on Digital India in English

The digital India project was launched by our prime minister Narendra Modi on 1st July 2015. It is an effective scheme to transform India for better growth and development of people and the country.

Inauguration of the mission:- digital India week from 1st July to 7th July was inaugurated by the prime minister. It aims to give India a Digital push for good governance and more jobs.

Benefits of Digital India:- Large-scale development of wi-fi hotspots has been planned by the BSNL all across the country. There is a plan of outsourcing policy also to help with the digital India initiative Bharat Net program will connect almost 25000-gram panchayats of the country. It may ease the important healthcare service through the e-hospital system. through the e-sign framework, citizens may digitally sign their documents online.

Indian government launches an application to pay online without any cash. this application is known as Bhim UPI. Indian Government makes India as s cashless country so he gives offers on her application on every transaction. He also gives some cashback for the UPI payment. You can log in to your profile with the help of your mobile numbers that connect with the bank. You can also take a loan from the Bhim UPI application. You need only some documents to take the loan. You can also check your bank transaction on your respective bank.