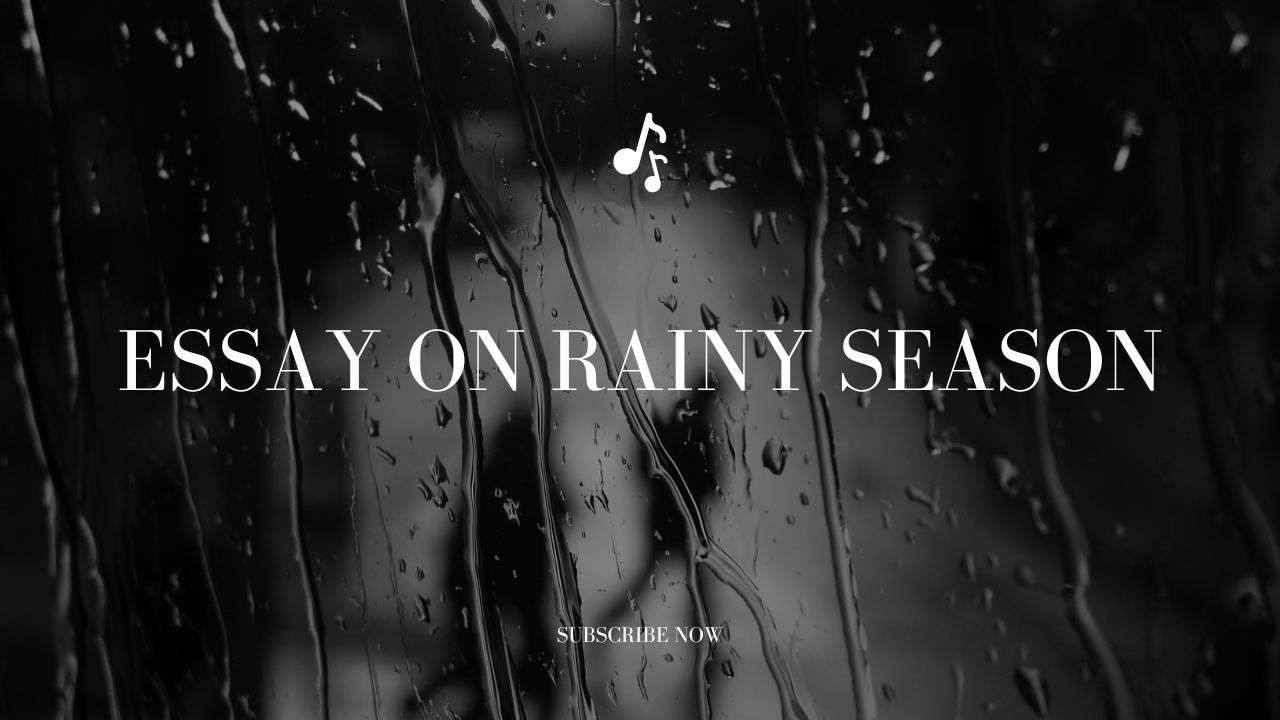 Essay on Rainy Season – Rainy Season is my favourite season. Black clouds gather in the sky after a rainy day. We hear thunder and see lightning. It starts raining a lot. The shelter can be found in a shop or under a tree. The people on scooters and bicycles are wet. The heads are filled with water. There are puddles on the road. It is difficult to drive a vehicle on these roads. Children play in the puddles and make paper boats. Some are dancing with umbrellas. The rainy season is a pleasant season. The rainy season comes in the month of July. It continues till September. The season gives us relief from the sun’s heat. Beautiful peacocks dance upon seeing the clouds. The Rainy Season, also known as the monsoon season begins in the middle of June and continues to till early September. It’s the time when most of the rainfall occurs, the sky is generally cloudy throughout the season. As it rains, dry barren ponds and puddles are infused with life again. The monsoon arrives in India through two routes, the southern state of Kerala and the North Eastern States through the Bay of Bengal. It is the first state in India to experience a shower. Clouds over the Arabian Sea are expected to bring the monsoons to Kerala.

During this convergence, water begins to rise above the atmosphere and form clouds. Whenever the clouds are overladen with water, rain occurs. rain falls there as a result of the shift of this ITCZ zone into land areas. the Indian monsoon occurs in the same way. During the peak summer months, I. In May-June, the Thar Desert and other parts of North, as well as Central India, heat up. this heating leads to the formation of a low-pressure zone throughout the subcontinent.

Blessing to the farmers

The rainy season is also a blessing to the farmers, as many crops depend on the amount of rainfall during the monsoon. crops that are sown on the arrival of monsoons are called Kharif crops and include rice, maize, pulses, millets, etc. these crops require a specific amount of water, which could only be obtained by rain. India, Bangladesh, and others depend on rain to a greater extent for crop production.

Monsoon or rainy season, lasting from June to September. The season is dominated by the humid southwest summer monsoon, which slowly sweeps across the country beginning in late May or early June. Monsoon rains begin to recede from North India at the beginning of October.

The following points are specific places around the globe and rainy season months as per the Gregorian calendar.

In the arid and semi-arid regions of Rajasthan, rainwater harvesting is carried out in the following ways:

(b) In arid and semi-arid regions, agricultural fields were converted into rainfed storage structures, that allowed water to stand and moisten the soil, like the ‘Khadins’ in Jaisalmer and Johads’ in other parts of Rajasthan.

(c) Particularly in Bikaner, Phalodi, and Barmer, almost all the houses, traditionally had underground tanks or tanks for storing drinking water.

(d) The tankas were part of the well-developed rooftop rainwater harvesting system and were built inside the main house or the courtyard. They were connected to the sloping roofs of the houses through a pipe.

(e) The first spell of rain was usually not collected, as this would clean the roofs and the pipes. The rainwater from the subsequent showers was then collected. (f) The rainwater could be stored in the tankas till the next rainfall, making it an extremely reliable source of drinking water, when all other sources are dried up, particularly in the summer.